I have always been drawn to things that are hidden and somewhat mysterious. As a freelance journalist, I enjoyed working on articles that dug deep, raised difficult questions and were sometimes controversial. (Unfortunately they often took a hell of a long time to research, so were not so great for the bank balance.)

Now that I’ve turned to writing ‘made-up’ stories, I find hidden and controversial things keep popping in my novels, too.

The brutal second Chechen war (1999-2002) forms the psychological backdrop to my novel. This conflict interested me partly because what was going on in this region seemed so shadowy. Russia had restricted foreign reporters; as a result much of what happened went unreported. 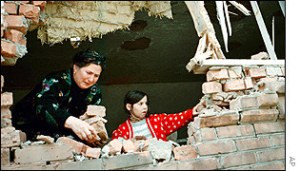 My Russian character, Nikolai – the romantic lead or anti-hero, depending on your perspective – has been destabilised by incidents while a conscript soldier in Chechnya. Although he is fictional, many of the incidents described in the novel are based on accounts of actual events (both published first-hand accounts and my own interviews with refugees and men who fought in the conflict).

I’ve long been interested in psychological trauma resulting from war and other violence. One of the questions I ask in the novel is to what extent someone can overcome a damaged psyche. My heroine must decide whether she can trust Nikolai, given the horrors of his past. But more importantly, can she trust herself to see who he really is?

The physical setting of Ghosts of Chechnya is London in 2005, the year of the bus and tube bombings. For a few weeks that July it seemed as if normal life might never be restored.

I’m sure I wasn’t the only person who for months afterwards couldn’t travel on a bus or tube train without pondering the chances of being incinerated by a bomb stashed in a fellow traveller’s backpack. During this period, my ideas for the novel began to gel. I was struck by the widespread anxiety bordering on paranoia around London, and at how an ordinary-seeming person secretly intending to create carnage could carry on unnoticed within their own families and communities. This led to the concept of “the enemy within” becoming a key element in the novel.

In Paris, watching people (and cars)! This one parked illegally but no one seemed to care. The last pic before we left. #paris #parisianstyle #parisstyle #redcar #
Shopping at a chic Parisian department store 🛍😃 Hubby bought me two late birthday presents 🎁 then sandwich in the sunshine in a park and sat in cafe with book - loving being in Paris… just a day left #parisianstyle #frenchchic #shoppingday #makeup #leweekend