Today I welcome award-winning author and journalist Maggie Ritchie to my blog. Ms Ritchie reveals what she did to research her two novels, from checking out galleries and pavement cafes in Paris – hard work indeed! – to studying witch doctors.

Research is one of the great joys of writing an historical novel. When I wrote my first novel, Paris Kiss, my research often took me out of the library to recreate the colourful and bohemian world of the Belle Epoque.

I needed to find out what life was like in the late 19th century for my two artist heroines, Camille Claudel and Jessie Lipscomb, who were both protégées of the great sculptor Auguste Rodin. As well as poring over history books, biographies, fashion plates and memoirs, I visited a stone sculptor’s studio to experience the cold, dusty, noisy reality of stone sculpting. I also spent a great deal of time looking closely

at paintings and sculptures. My imagination was fired by the work of Claudel, Lipscomb and Rodin, and also by that of their contemporaries, who captured the everyday lives of Parisians. Manet’s Dejeuner sur l’herb, Seurat’s La Grande Jatte, Renoir’s Dance at Bougival, and Toulous-Lautrec’s paintings of louche and despairing dancers, singers and prostitutes all inspired scenes in my novel.

Renoir Dance at BougivalOf course, visits to Paris were an essential part of my research – and not exactly an ordeal. I walked the same streets as Camille and Jessie, sat in pavement cafés in Montmartre and Montparnasse, and visited Rodin’s home. It’s now the Rodin Museum displaying not only his works but also those of his lover and muse, Camille Claudel.

The sculptures by Rodin and Claudel gave me fascinating insights into their world and their creative process. As well as looking at their works in the Rodin Museum, I made use of The Burrell Collection and the Hunterian Museum and Art Gallery in Glasgow (where I live), all of which have pieces by the great man, including The Thinker and his bust of Camille Claudel. 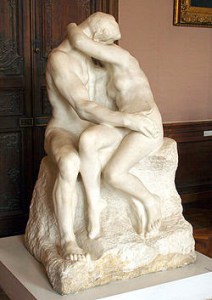 It was Rodin’s The Kiss which inspired the novel’s title and spoke of the passionate affair between its creator and Claudel. The sculpture came on tour to the National Gallery of Scotland in Edinburgh and it brought me luck – the day I went to see it was the day I learned that Paris Kiss would be published by Saraband. 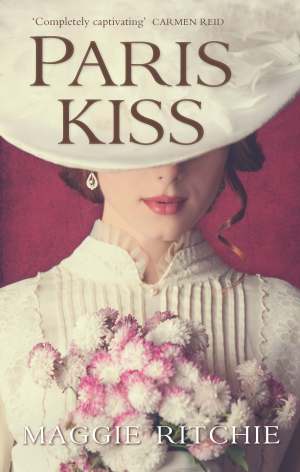 My second novel, Looking for Evelyn, was more contemporary and I thought it would need less research, as it was set in 1970s Zambia, where I spent a big chunk of my childhood. However, I soon discovered that while the sights, sounds, smells and vivid colours of Africa came back to me in great sensory waves, I needed to find out about the grown-up world of politics and race that had gone over my head as a child.

The library beckoned once more – Glasgow University Library is a fantastic resource and well worth the annual fee – as well as a trawl through Abe books for the memoirs, novels and studies of people who, like my father, had lived and worked in Southern Africa when African countries were shaking off their colonial masters.

I read the memoir of a colonial officer who travelled through the Federation of Northern of Rhodesia and Nyasaland – now Zambia, Zimbabwe and Malawi – and studied the tribal customs. They gave me an insight into the traditional beliefs in witches, witch doctors, curses and charms – which became part of my story about a journalist who returns to Zambia to uncover a scandal she witnessed as a child involving an English woman, her colonial officer husband and a gifted black African artist. 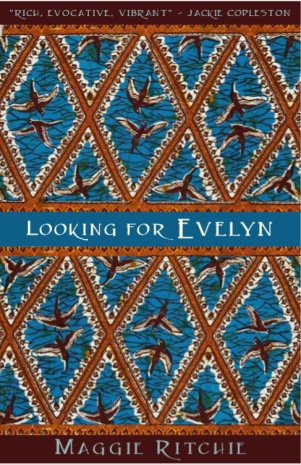 Because Looking for Evelyn is set in the recent past, I was able to do ‘live’ research – interviewing people who had lived in Zambia during the 1970s.  I recorded the memories of my parents and discovered fascinating aspects of their lives I would never have otherwise known. I had grown up with some of the more colourful family anecdotes: the teacher training college and brand-new language laboratory that my dad had spearheaded that was burnt to the ground one night; the near-death brushes with poisonous snakes; the flying ants my mum fried for us one supper-time; the college messenger who doubled as the village witchdoctor. But I also discovered why a teacher training college was so necessary and how it was part of a larger plan by the outgoing British administration to train the local population that had been denied anything other than the most basic primary school education.

An interview with a friend’s mother, who had run the Lusaka Club with her husband in the 1970s, gave me the idea for the scandal that rocked the British community in my novel, as well as an insight into how hard it was for white women and mothers in what was considered a tough posting in an undeveloped country suffering from shortages and rife with disease and danger.

I also interviewed a retired missionary priest, a White Father, who had gone out to the Federation in the 1950s as a young man from Ireland and had stayed until the Aids epidemic in the 1980s. His compassionate insights, funny stories and regrets about the British experience in Southern Africa added layers to the novel and deepened my own understanding of the country I had loved so much as a child. Like my heroine, I enjoyed revisiting it, even if through my imagination.

I’ve found that research is an essential part of writing and adds the rich details and truths that make an imaginary world real to the reader. Now, if you’ll excuse me, I have to get back to reading forgotten memoirs and looking at paintings for my latest novel, set in turn-of-the-century Glasgow and 1920s Shanghai.

Maggie Ritchie is an award-winning author and a journalist. Born in India, she grew up in Zambia, Spain and Venezuela before settling in Scotland, where she lives with her husband and son.

Maggie graduated with distinction from the University of Glasgow’s MLitt in Creative Writing, where she won the Curtis Brown Prize 2012 and was runner up for the Sceptre Prize. Her debut novel, Paris Kiss, was longlisted in the Mslexia First Novel Competition in 2014.
She has had short stories published in magazines and in New Writing Scotland.

Changes. Cause i just can’t seem to get me right.

But you knew there would always be the spring, as you knew the river would flow again after it was frozen.