Not long to go now… My debut novel (I like the sound of that, forgive me) is set to be published by Unbound this summer! (cue drum roll, clashing of cymbals and general hullabaloo, however that’s spelled) They are aiming for June but have warned me about possible delays. I will have a firm date closer to the time.

I’ve been assigned an editor who has been going through my manuscript, focussing on the big picture, broader structural issues and so forth. She has worked with some top authors and publishers – I’m hoping some magic dust will rub off onto my book. Of course, I delivered the MS in a state of near perfection 🙂 but almost certainly someone else will have another view about plot, characters, sentence structure and wotnot. The novel has had loads of reader input and critiques, some fairly rigorous, but this will be the first professional assessment.

Moving swiftly on, before I can start to worry… This part of the process is due to take roughly a month, to be followed by the closer inspection phase of copyediting and proofreading. Along the way, a designer will get to work on the cover.

So, it’s all happening! It does feel a little surreal sometimes to have a publisher for my novel, after all this time doggedly writing away and wondering if I ever would. (It’s nearly fifteen years since I began – novels, intermittent poetry and lately flash fiction.)

I have a brief interlude now before I will have to revisit my MS – will be trying to relax and not get too obsessed with doing whatever may or may not help my book’s fortunes, planning ahead and worrying about miscellaneous stuff. This is easier said than done, as there really is a hell of a lot I don’t know about re book publishing and promotion, and jolly well ought to be finding out. But one step at a time.

Now, as this post has been somewhat word-heavy so far, here’s some stills from videos taken in Glasgow of the book reading I did with fellow Unbound author Ian Skewis and actor Gavin Mitchell (taking the part of Nikolai). Credit to Runilla Chilton, our impromptu cameraman – or is that cameraperson? 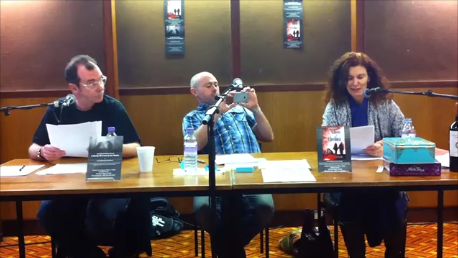 I’ve been toiling away learning how to edit videos, given that by the time the book comes out I will have to deliver a video of the novel’s settings to supporters on Unbound who pledged for this reward – unless they all want a personal guided tour, that is. My first editing attempts ended with me spitting in frustration, yelling and thumping the desk. (Perhaps I should stick to writing.) Things went better with Movie Maker installed, which though basic is fairly intuitive. Can anyone recommend some simple video editing software, by the way?

Due to the limitations of WordPress – no videos permitted unless you pay through the nose, grrrr – I can’t put the videos up here. If anyone wants to check out the wonderfully dramatic performance of When Georgie met Nikolai parts 1 & 2, please hop over to my project page on Unbound: https://unbound.co.uk/books/ghosts-of-chechnya

Back again soon, off now to try out i-movie and practice shooting with the i-phone.

6 thoughts on “Ghosts of Chechnya to be published this summer”